The history of our world renowned Gwendariff Irish Setters.

This is the story of how the kennel became established and the history behind it.

Gwendariff Irish Setters were officially established in 1991, although my family had been showing them since 1973. The Breed has been a family favourite for nearly fifty years, initially owned and bred by my parents Albert & Marlene, who showed the dogs throughout Northern Ireland with moderate success. I was a keen child handler and my passion for the dogs grew as I worked with them, enjoying developing a bond with each of the boys and girls the kennel had retained. Most of our family dogs were purchased from the late Mr Walter Thompson of the Moirabank kennel, which were predominantly of Wendover/Timadon breeding. Career situations meant that shows had to take a back seat in the lives of the family, but nonetheless the love and desire for the breed remained.

When I moved to my first home aged 21, the first thing I did was buy a dog – not just any random dog of course! It had to be a Red Setter. The story of me going off to buy a sofa for my new house and coming home with a 5 month old Irish Setter instead shows just how much the fire was burning inside during all those years of not having one in my life. This first dog was not a show dog, merely a lovely girl who needed a new home and it was through enjoying and living with ‘Guinness’, as she was called, that the wheels went into motion to revisit and re-join the dog show world.

My next purchase, a male Irish Setter named Bart Man at Gwendariff won a number of Best in Shows at Open Shows and he really then rekindled the ‘show bug’.

For around 10 years the kennel enjoyed some average success in the local area and the odd trip to UK shows gave me the opportunity to make new friends, expand my knowledge of the breed, experience a new and robust outlook and to learn so much from my various mentors along the way. It was on one of these trips that I met and soon became friends with Bonnie Andrews (now Turner) of the Bonhomie affix, as well as UK Top Breeders of All Breeds for many years, Stephen & Patsy Hollings of Gunalt Weimaraner fame. Bonnie taught me so much and was certainly the one who instilled in me the grooming techniques and coat ethos I have today. From a general, all-round correct approach to the dog world and breeding techniques, my mentors Stephen & Patsy opened my eyes to various ideas for breeding patterns. I have much to thank these established breeders for. Through them too came their introduction to other enthusiasts and breeders.

One such breeder I met, after noticing her fabulous bitch Sh Ch Clonageera Megan, was Mrs Pat Rutherford. The impression this outstanding moving bitch had left upon me prompted me to book a puppy from her next litter. It was a cool 18 months before I got my special girl and what a tide-turner she turned out to be. Pat agreed to let me have the beautiful Klassique who was my first choice girl from the litter. There was just something about her I couldn’t quite put my finger on at the time. Perhaps it was her amazing head carriage, self belief and how she stood naturally uninterrupted, looking already like a star – who knows, but she sure was the only one I wanted. Fate played a hand as Jim, Pat’s then husband, chose another girl to be their keeper. Klassique was coming home to Gwendariff – I couldn’t have been happier!

My dog journey was enhanced by the fact that within my profession I had the opportunity to work with dogs of various breeds mainly German Shepherds, Malinois, Labradors and Springers. I spent almost thirty years of my life in this industry and many of those early training principles have become established in our day to day lives with our Show Dogs.

My husband, Alec, became involved with the kennel almost 15 years ago. He too hailed from the same working background, so it made for a very simple transition when we partnered. Both of us had extensive experience over a range of disciplines working with the dogs, and both brought the same values and principles to what was already established as a successful kennel. Together now, we embraced the dream of making ‘Irish Setters from their native land to be among the best in the world – returning their glory days back to their homeland’.

When my parents decided to return to the show ring, this time it was with a Whippet. A present from me to my mum and dad, a silver brindle puppy boy with white trim, Collooney Silver Fox joined the family. He was to become the first UK Champion bred by the now world famous breeder, Ms Vivienne Coulter, as well as the first for my parents. My own interest in the breed grew and I too have enjoyed some success with Whippets. I won a few Reserve CC’s with my own Whippets and bred a couple of litters over the years. Some of these gained their UK Stud Book numbers. A horrible fatal freak accident happened to my new four months old puppy which totally devastated me. It was to be another twenty five years before another Whippet came home to live personally with me, such was the impact this sad situation left on me. I am now however enjoying this fast and fun-loving breed once again with our Dutch import girl, bred and co-owned with close friends Jan & Kris Akerboom from Crème Anglaise’s world renowned kennel.

Other breeds with which we have personal experience include Cocker Spaniels, Pointers, English Setters, Weimaraners, Hungarian Vizslas and Tibetan Terriers. Not all were successful, in fact some just were not good enough at all for showing, but we loved them, and they each gave us many happy times away from the dog shows. Those which did become champions were the Weimaraner, GB Sh Ch & Ir Sh Ch Gunalt Echo bred by Stephen & Patsy Hollings and the Hungarian Vizsla GB Sh Ch & Ir Sh Ch Bitcon Byron Bay bred by Moray Armstrong. 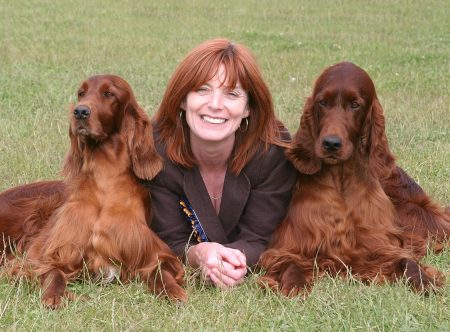 Together Alec and I have a vision, with both working extensively towards the same objective. Alec is quietly focused and has a high work ethic. With 40 years of working in a disciplined professional environment his passion for high standards is unwavering. I am a professional, highly driven individual who is generally seen as the ‘front’ of the kennel. We are a team and have the same end goal. We continue to strive, build and strengthen our kennel through the decisions we make on stud dogs, brood bitches and young new stars. Ultimately, we have a passion for perfection.

We live outside Hillsborough in Northern Ireland, enjoying on a daily basis the commanding views of the County Antrim and Down countryside. Our dogs do not live in cages nor wire pens. They have a purpose built centrally heated house with acreage to enjoy running and playing in. We generally try to keep only around 10 – 12 dogs at home with us, with many partnered with friends for them to love and enjoy showing too. Our mindsets are that mentally fit, as well as physically fit, makes for happy and healthy dogs – it seems to work as many of our dogs live beyond 12 years of age. Irish Setters are happy and fun-loving dogs with a positive attitude to life. They say that dogs are like their owners……. My glass is always half full, never half empty! 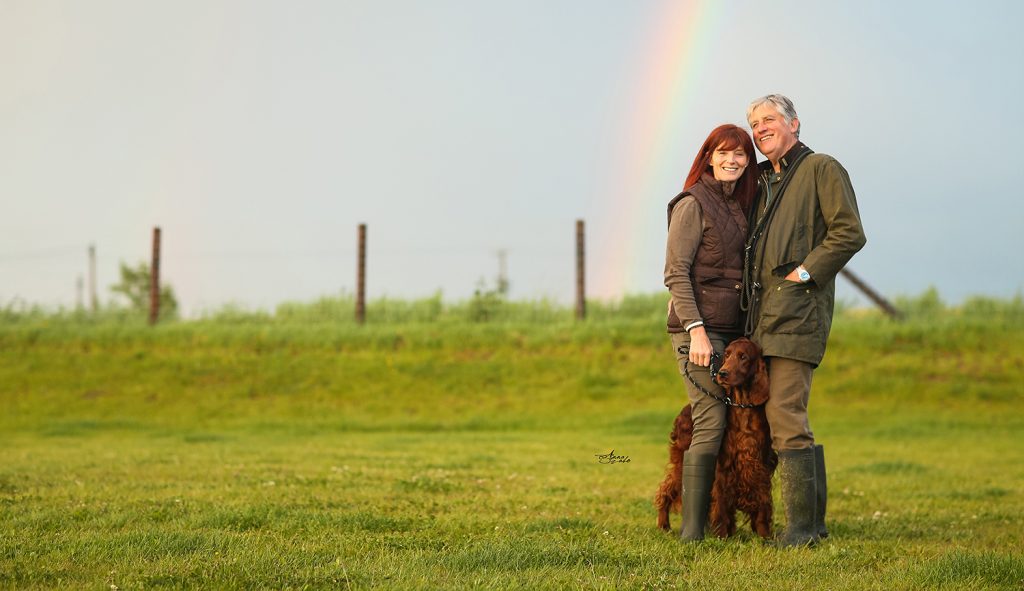