Gwendariff Whippets was established in 1991, when I purchased the first of the kennel’s Whippets from Ms Vivien Coulter of Collooney Whippet fame. This was a present from me to my father.  Little did we know that this delightful puppy would go on to win his GB title, Irish title, Northern Ireland Puppy of the Year as well as qualifing for the prestigious Pedigree Chum Champion and Veteran Stakes competitions in the UK.  He won a number of Groups and Group placings in Ireland.  He holds the record as the winner of the most CCs of any Whippet to date, in Ireland.

This Silver brindle boy with white trim was an exceptional moving whippet, who won his first CC at Border Union from the Yearling Class, awarded by esteemed judge Terry Nethercott.  He finalised his total with 9 CCs.

Blaze, or officially called GB CH & IR CH COLLOONEY SILVER FOX JW, was the dog who influenced the move back to showing again for my parents after a career change had forced their exit from the dog show world at that time.

It was to be the win of a lifetime at CRUFTS in 2015 for Albert, when his special girl Gina, GB & IR CH DEMERLAY ARMABAY BILLIE JEAN, won Best of Breed from an entry of almost 500 Whippets.  How truly special that day became!  The judge for bitches was breed specialist Bitte Ahrens Primavera, of the world famous SOBERS kennel. To win under such a respected judge was an accolade in itself, but to then take Best of Breed and represent the breed in the Hound Group at Crufts was a new and exhilarating experience for Albert.

You can imagine his delight when he was awarded Hound Group 2 under Mrs Carla Molinari from Portugal. I think the pictures contained herein go someway to showing how much this special day meant to the family 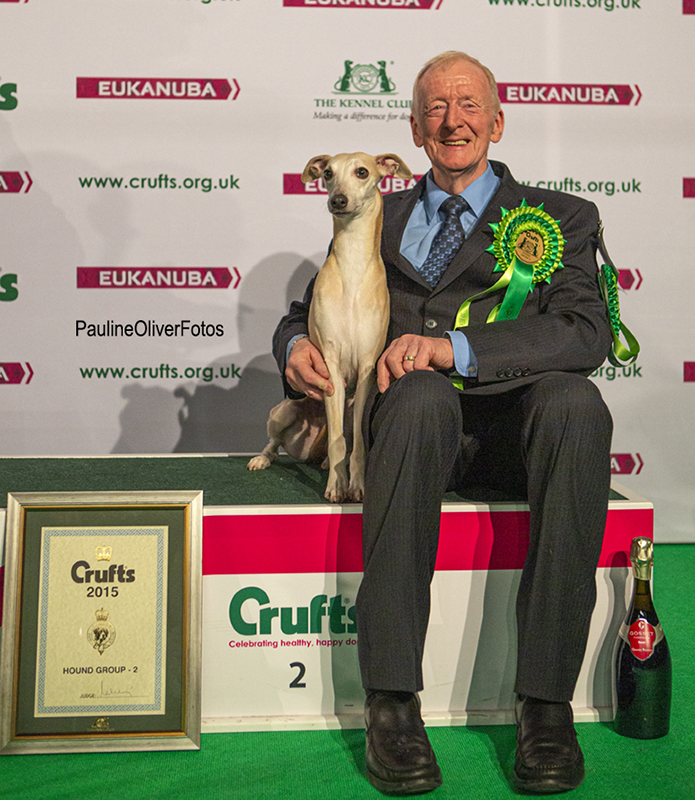