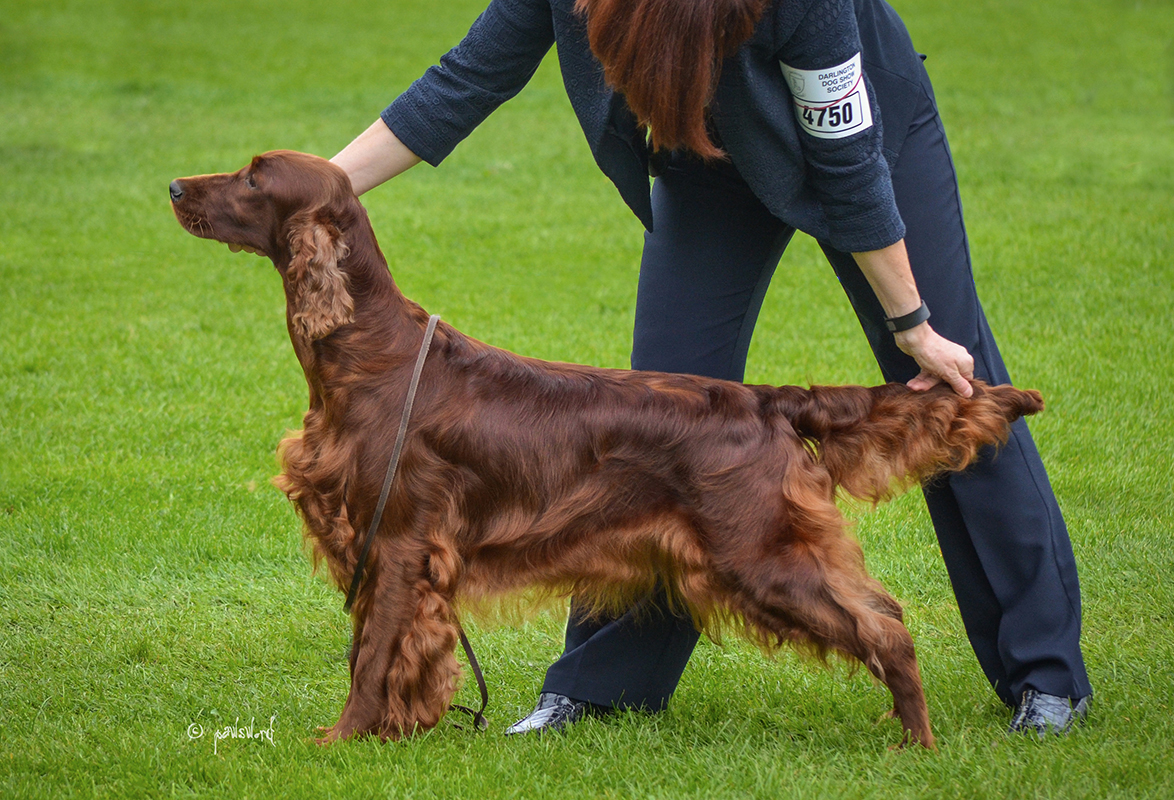 Over the years we have been fortunate to have had some beautiful bitches who have become Champions, Best In Show winners, Groups winners and such like, as well as those who have been able to reproduce the next generation for us.

In Tosca, we thought we had it all – the most beautiful girl with the very best of construction teamed with an outstanding free flowing, easy gait and a temperament to match.  A stunning baby, with the new bloodlines we had selected – oh my, how lucky were we!

Things went well for her in the show ring and in a reasonably short time she was starting to really fulfil her potential and had established a little fan club!  She won her first CC from esteemed judge and specialist, Mrs Bonnie Andrews, already having been awarded a Reserve CC.  Sadly, a freak accident whilst running in the fields at home rendered Tosca an irreparable shoulder injury. The tendon had become misplaced and could not be rectified.  We gave her as much comfort as we could and resigned ourselves to the fact that our stunning girl would not make it as a GB Show Champion, continuing that unbroken tail female line of Champions from Klassique.

This sad event showed us how fickle a Show dog’s life can be – anything can happen when one least expects it. We were determined that this wonderful, special girl would still shine – she had my heart especially and I hoped she had much to give as a mum.  The Gods shone down and with careful selection we chose a very special Sire for her, not once but twice.  Record making Crufts Best Of Breed winner, GB Sh Ch & Ir Sh Ch Northamber Just Cause For Glenavna JW, matched up so well with Tosca and together they have now given us another era of multi titled and successful winners.  We hope you will enjoy TOSCA’S PROGENY page as much as we do.  To see her children all together has given us much joy and delight.  Three of her progeny have amassed over 40 CC’s between them, as well as having the honour of winning the Gundog Group at Crufts in 2020.

Single titled, as Irish Show Champion Gwendariff Walnut Whip CW’15, she is a Champion Brood Bitch, having achieved this coveted award on three consecutive occasions in 2017, 2018 & 2019.

She is a Champion mum and a Champion of our hearts ………..that’s more than enough.

Her prospects as an influential brood bitch for us proved invaluable.  The strength of a great kennel is in its exemplary Brood bitches.

A few of Tosca's Progeny