“Carve your name on hearts, not tombstones. A legacy is etched into the minds of others and the stories they share about you”

Few can say they truly leave a legacy – ‘Klassique’ was one of the exceptions.  Bred in the purple, her genetic footprint was exceptional.  She was the founder, the matriarch and the personality behind all that now bear the name Gwendariff at their fore.

Generation after generation bear her qualities. Without Annie the Gwendariff dynasty would never have risen to such eminence. To Pat & Jim Rutherford of the famous CLONAGEERA IRISH SETTERS, “Thank you for breeding this special lady and allowing her to steal our hearts – we hope she has made you proud”.

Words just cannot describe how honoured and privileged we feel to have been able to share our lives with our own monarch, Annie – The Queen of Gwendariff.

Our Tribute to Annie

I was at Bournemouth Championship show in 1996 and saw a beautiful bitch in Open named Sh Ch Clonageera Stella.  I thought her most lovely; not too big, very pretty and sound as a pound all completed with such a lovely nature and style about her.  I had long admired Sh Ch Marksway Marquis and his breeding was from Andana, the same foundation as the Clonageeras.  I spoke to Stella’s breeder, Pat Rutherford that day and decided to book a puppy there and then.  I waited for 18 months until the day I got her.  I never could have dreamed that this little bundle was going to have such an impact on my life. 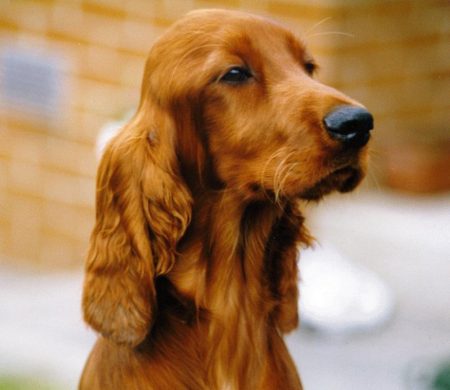 From the moment I got her I just knew she was special.  She had a certain air about herself that I had never seen in any of my other setters, but yet she was so gentle and kind.  Her soft expression could have melted a stone. Annie’s first show was South of England Irish Setter Club under Jim Smith and she won three classes.  Jim's verbal critique, I can remember, spoke about her beautiful shoulders and how refined she was through the blades.  He said she had the best shoulders of the day.  I was so delighted. I call her my ‘First Lady’ – as she was the first Irish Setter I had owned who had achieved a Challenge Certificate, the first to achieve a Best in Show award at a Club Show, the first to achieve an All Breeds Best in Show here in Ireland, the first to attain a Show Champion Certificate in Ireland, the first to achieve a Show Champion Certificate in UK, the first to attain the very coveted Dog World Brood Bitch award – which she then won for 4 years in succession. (Her daughter Pop My Cork then retained this title for our kennel after her.)  I mated her to Sh Ch Danaway Fortune Teller JW and she had ten puppies.  Three went into the show ring and all three became Show Champions, Gwendariff Moet & Chandon, Gwendariff Dom Perignon and Gwendariff Pop My Cork – these three dogs amassed a total of 48 CC’s between them with Dom Perignon going on to produce 10 more Champions in UK & Ireland and two others currently on 2 CC’s and litter sister G Pop My Cork going on to produce 6 more Champions in the UK and Ireland and three other CC winners, so far.  Annies grandchild, Gwendariff Rock Chic is a combination of both Dom Perignon and Pop My Cork and her mating to the successful Stud, Shenanagin What Next, has given Rock Chic this years’ ISAE title of Top Brood Bitch.  What a lovely testament to my darling girl that her child and now her grandchild have followed in her footsteps. People often ask about your special memories in the show ring. 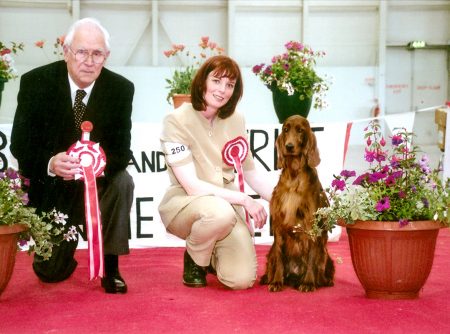 One of my most treasured was when Annie won her first CC (and my first) at Midlands Irish Setter Club in 2001 under judge Roy Rout.  She was young but had to go into Mid Limit due to her Irish Kennel Club wins.  I was totally shocked when she got the ticket and really didn’t know whether to be ecstatic or cry!  In the end I did both – but cried privately in the car after it had all sunk in.  The worst bit however was that I didn’t even get to go home with her, as she was going off to Danaway with the late Brian & Mary Gurney to be mated to James later in the next week……………it was the most awful feeling ever.  That night I was staying with a friend, Jo Howe who had Weimaraners.  When I got to her house she produced a couple of bottles of Champagne to celebrate – that’s how we came to have champagne names for the litter Annie was now hopefully going to have.  Annie’s second CC came at Driffield under judge Christine Schofield – that day John Thirlwells  Shandwick Amethyst at Ferndel won his 3rd CC and BOB.  I have a lovely photo of the day that Annie won her 3rd CC on home ground at Belfast & District Irish Setter Club under the late June Hill. This time it was her turn to win BOB and Best in Show, as the CC Dog was none other than Shandwick Amethyst again!  When Dom Perignon won his second CC at Blackpool under judge Val Lockhart it was so wonderful when his lovely mum Annie won the Reserve – a truly lovely day. In Ireland my most memorable day was when she won Best in Show at Bray General Championship show in 2002.  It was a breed specialist doing the breed, Terry O’Leary and also another breed specialist judging the Gundog Group, Anne Gormley.  I was so delighted to have won the Group and never really considered that we would go any further.  Respected Irish All Rounder, judged Best In Show and when he chose Annie as his Best in Show winner, the audience erupted.  I came out of the ring and so many people were there to see her.  I was overwhelmed at just how popular she was.  Such lovely comments she received. I have spoken about my memorable times in the ring with Annie but at home she was just a little star and very quickly but quietly took up her position in the pack as Alpha female.  Her subtle ways, with just the lift of a brow or a sideways glance were enough to keep the naughtiest young pup in check. She loved her walks and having that special time away with me when we were at shows. She was my shadow.  When she was due her first litter I was on a course with my work so I asked my mum to come over to watch her. She had been panting heavily through the night and I really did not want to leave her as I thought she might start within a few hours.  I had an exam on the course so had no option but to attend.  She waited all day until I came home and as soon as she heard my voice, the first was born – it was now 6 pm at night!  She was very assured of herself - she never gave kisses except first thing in the morning to greet you. I still miss waking her. We chose not to attend Crufts in 2012 preferring to spend our time saying our Goodbyes to our darling girl – she still gave us special memories even when we were doing that………. ‘Annie Ritchie’ as we used to call her, was a very special dog.  I am heartbroken that she is gone but feel so proud of her and everything she has given us. She made Gwendariff what it is today.  We shall endeavour to uphold her legacy.  I am just so privileged to have th honour of being part of her life. Thank you to Pat & Jim for allowing me to have her.  She is pictured below in her hey day ith all her other brothers and sisters – all became Show Champions.

It was a lovely era and ‘family’ to be part of.  I am truly grateful. Annie we miss you but I know that you are here – my darling girl your spirit surrounds me every day.

Thank you for such special times.

A Tribute to Annie by Rachel Shaw-Rainey

Annie was without doubt one of the most beautiful Irish Setter bitches of a golden era of the breed.  A daughter of Sh Ch Clonageera Stella and more importantly a great grand-daughter of Sh Ch  Clonageera Megan who is widely acknowledged as one of the best bitches the breed has ever produced. From this excellent line of bitches Annie became the foundation bitch of Diane Ritchie’s Gwendariff kennel.  Annie was Diane’s ‘First’.  Her first Champion, her first Best in Show winner, her first Brood Bitch producing the the three litter mates Show Champions, Gwendariff Moet & Chandon and brother and sister champions Gwendariff Dom Perignon and Gwendariff Pop My Cork and in turn these two have produced champion after champion. More important still was that Annie, following her dam, was top Irish Setter Brood Bitch for 2 years and her daughter, Pop My Cork, was yes, another Top Brood Bitch from this magnificent line. Grandaughter, Gwendariff Rock Chick has also won the Associations award for Top Brood Bitch in 2011. What an incredible gift Annie was for Diane and what a wonderful legacy she has left the breed. As well as her significant achievements in the breed, Annie was first and foremost a special lady in Diane’s life.  Her temperament was loving and kind and she was fun loving and gracious with all who met her.  Diane has lost her touchstone and the breed has lost a Queen.

Best In Show - All Breeds Winner

Annie had 2 litters in her lifetime.

A few of Annie's Progeny